Once upon a time, a long time ago in the heart of the deep south of Italy a land rich in history and wine culture. A land kissed by  sun, cultivated with passion and tenacity. A land that “once had a heart made by the dominant passion of our grandparents, tenacious vignerons able to write important pages of a story that has as its title Negroamaro. 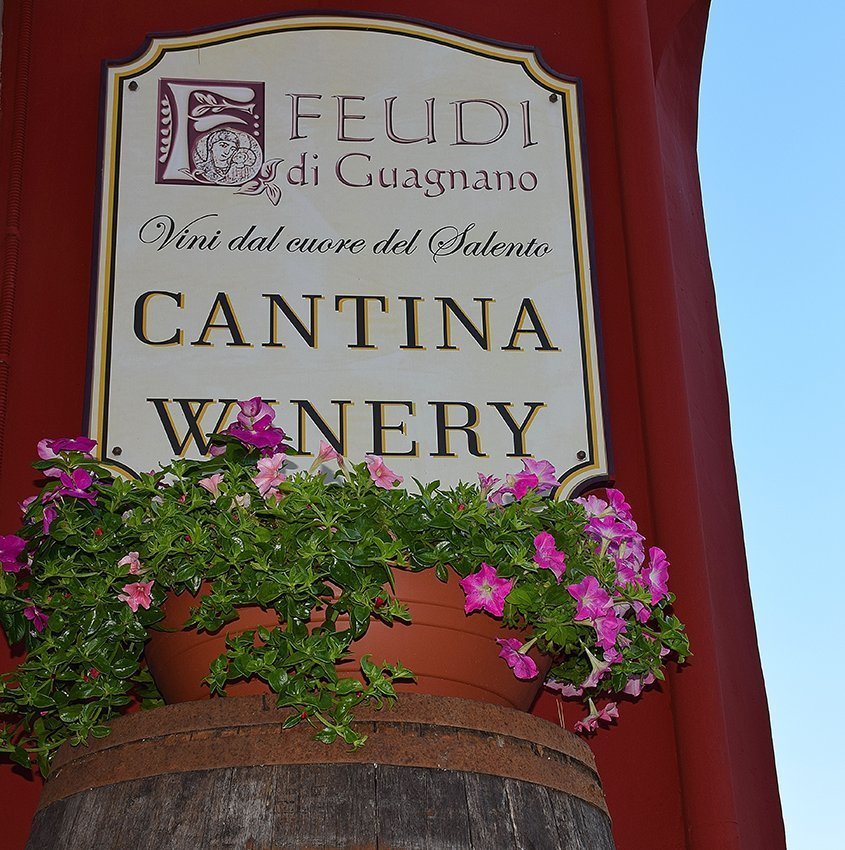 Not a story like all the others: in fact, you can see the fatigue and the spirit of sacrifice of people born and raised in a strip of the south, where the newspaper often tended to merge with the eternal. “A rough land, strong, hard, but who has always given wonderful and generous fruits to his people. This land that gave so much to our ancestors was about to be forgotten, abandoned and betrayed.

In the early 2000s many lands suitable for the cultivation of the vine in the countryside of Guagnano were abandoned by the new generations, who took refuge in jobs and jobs less hard and demanding, turning their backs on centuries of peasant wisdom and cultural traditions. In this negative scenario, with great courage, in 2002 Gianvito, Carlo and Franco, nephews of those same tireless winemakers committed themselves, having saved from the abandonment the ancient vineyards of negroamaro belonged to our ancestors, to write daily a new chapter of this long and fascinating history calling it “Feudi di Guagnano“.

In the name of the winery the word Feudi derives from the word “fiéu” that in the dialect of Salento means country district or the grouping of all the vineyards, large and small that were headed by the Lord and master feudatory of Guagnano. And in fact these small and large plots of land cultivated in Alberello Pugliese with plants between 20 and 80 years go to make up the entire heritage of the company from which are produced the precious clusters that will be used to produce great wines made in Salento. 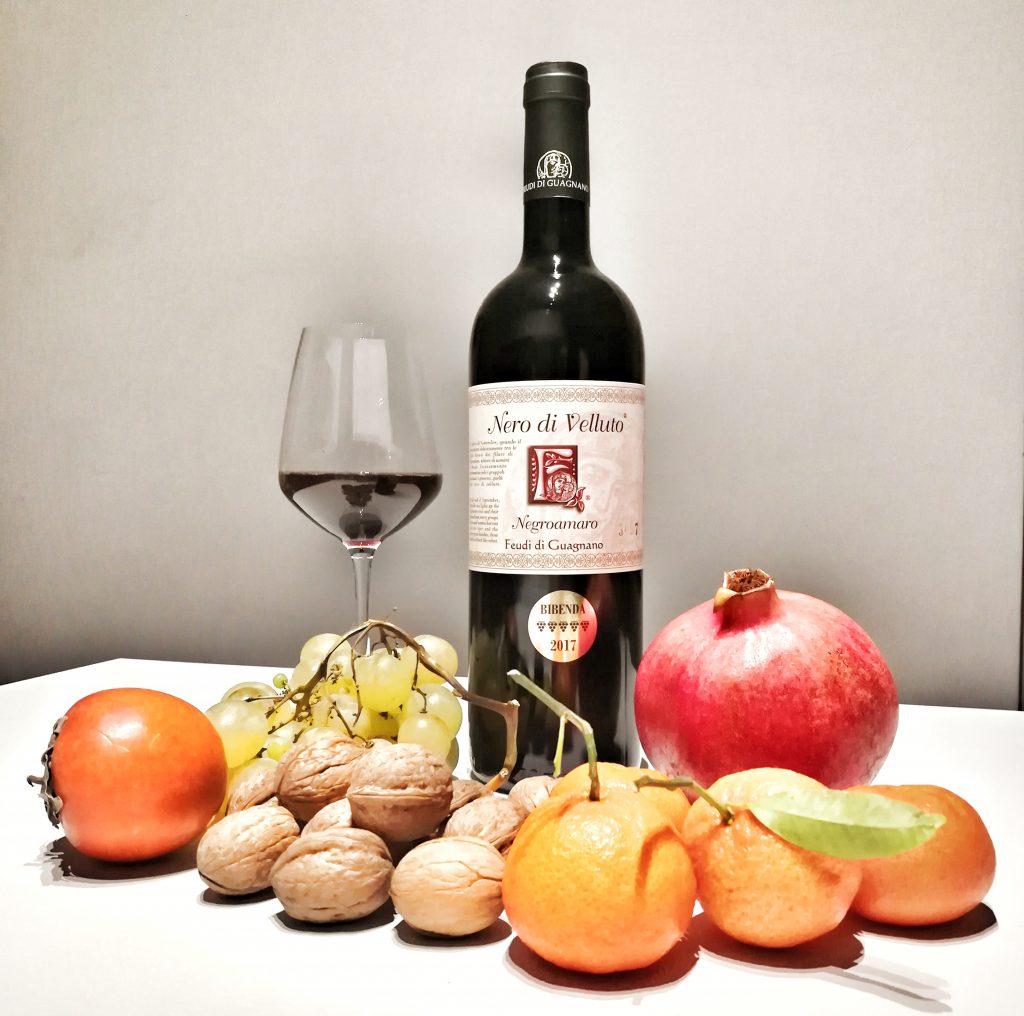 The company currently owns a vineyard extension of 30 hectares, all distributed in the area around Guagnano. To date, the annual production consists of about 200.000 bottles, divided into 15 labels where the Negroamaro is the master with its red wines of great body and structure and tannins. A company that starts from the preservation of the traditional heritage of Salento viticulture, but which is technologically and commercially projected towards the future.

Among these, Nero di Velluto 2012 stands out, a pure negroamaro with an intense ruby ​​red color, a wine enveloping a wine with complex but not excessive perfumes, warm and velvety in the mouth, with spicy notes of black pepper, tobacco and cocoa. A wine with a limited production of about 10,000 bottles a year, all numbered by hand, obtained only in the best vintages from bunches selected by hand from a vineyard of 1935. A wine with a rich, very long and persistent finish. A wine in which the strength and power of Negroamaro are dosed with balance and elegance. An incredible best wine awarded by “5 grappoli Bibenda” 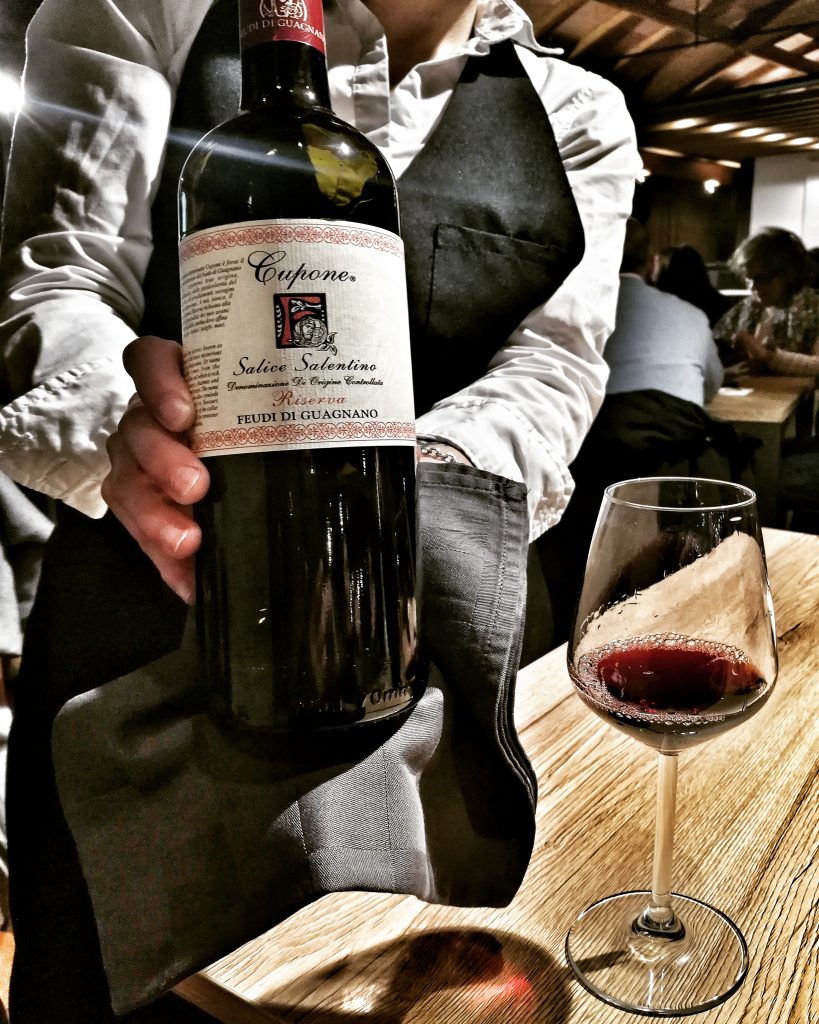 Another wine worthy of note is Cupone Salice Salentino 2013 Reserve. If you are looking for the best quality at the best price then this is the wine for you. Immense quality guaranteed by hand-harvested grapes from Negroamaro and Malvasia Nera vines grown in Alberello Pugliese. Plants of about 50 years, harvesting of the bunches by hand, and final selection to select only the healthiest bunches make this wine already special at the start. In addition the work done in the cellar with a long maceration vinification, and a mixed steel / wood refinement make it a wine rigorous, elegant and refined, but with an uncommon strength and temperament.

Guagnano, together with Copertino, San Donaci, Nardò, Salice Salentino and the entire southern Ionian area of ​​Salento, are the lands of choice for the production of wines based negroamaro. Feudi di Guagnano is one of the wineries that is able to make the most of this autochthonous grapes with its never banal, austere and elegant wines, with a very high aging capacity, but which maintain an extreme freshness and pleasantness.

If you come on holiday in Salento or if you are in these parts, you can not stop at Guagnano, the land of Negroamaro. Once in Gugnanano, visit the three wonder boys of winery Gianvito, Carlo and Franco, who will offer you a welcome worthy of the famous and traditional Salento hospitality. Cheers!!

Visiting the Marulli Winery in...

Before beginning to talk about the history and the characteristics of the Salento rosè wines, it would be more correct to speak in general about…

The winery Michele Calò e Figli, was born from the work, passion and the commitment of the founder Michele Calò. Now, after the death of its…