For history and winemaking tradition, Salento can be considered one of the birthplace of world enology. The cultivation of grape, already attested around 2000 BC, was always an integral part of the region economy, so as to draw, even then, the particular landscape. Brindisi, along with the port of Egnatia, was one of the most important wine ports, a focal point of international trade, from which wines of all types were exported. The wine history of Salento can not be told apart from Negroamaro rosé wine, and traditional wine-making  at  tear called in Salento “a lacrima“. The Romans knew the wine made from the virgin must, which Plinio, an ancient Roman writer, called “protropum” and L.G.M. Columella in our book “l’Agronomia” wrote in 1808, called “mustum lixivium” the first wort coming out spontaneously without compression of the grapes, which was mixed with honey to 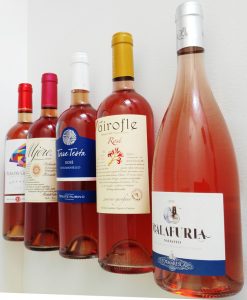 prepare the “mulsum” very popular drink at the roman’s time, traditionally offered to travelers. Testimonials of winemaking “a lacrima” is already in the “De Historia Natural Vinorum” by Andrea Bacci and in the writings of Santo Lancerio, cellar master of Pope Paolo III Farnese. In later centuries it continued to produce “a lacrima” simply because easy to obtain and easy to drink. The first wine, which flowed from the winery where the grapes freshly harvested, fermented separately, has long been the basis of the bulk rosé, called “lagrima” was so popular in Salento for self consumption of the families of the peasants and the bourgeoisie had been placed rural. Towards the middle of the nineteenth century, the viability of the viticultural centers, with the connection of railways and the activities of the ports of Brindisi, Taranto and Gallipoli, favored a large export of grapes and wines, which profited greatly to the spread of the vineyard. The advent of phylloxera, an afid parasite accentuated this trend as France, first to be damaged, he turned to the southern regions still immune to this scourge. Salento could export, as well, large quantities of wine, but rosés were still little demand and their consumption was limited only to the production areas. With the “War of the Customs” between Italy and France, which banned the import from the south, and the arrival of phylloxera an afid  parasite in Italy, viticulture in the region suffered a severe crisis. 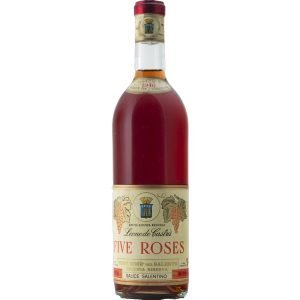 The big historical relaunch of the Salento rosè wine occurred in 1943 at the hands of Piero and Salvatore Leone de Castris. At the end of the war, the American General Charles Poletti, Commissioner for procurement of the allied forces, asked for a large supply of rosè wine, and so it was that in the ‘company of Salice Salentino, was packed into beer bottles closed with metal cap, a rosé made from Negroamaro, whose grapes came from the terroir of “cinque rose”. The general wanted a wine from the english name, and so from the english translation of “cinque rose” was born the “Five Roses“. Characters who have shaped the history of rosé from Salento, as Severino Garofano, the greatest interpreter of Negroamaro, a proponent of the South wine renaissance, Mino Calò, returned to the family business after studying oenology in Alba in Piemonte, to produce and bottle with determination and foresight, the Salento rosè wine and finally Michele Calò, that already in 1950 sold in Milan the symbol and pride of Salento wines, including the Rosé of Negroamaro, thus to make it feel less far from home so many expats from Apulia and Salento. The rosè is, so, the story of the great civilization of the Salento wine, which did rise Negroamaro a symbol of redemption: a humble blending wine used to give body to the North bottles, to the undisputed protagonist of quality winemaking. It is a wine that makes you want to raise your glass at the happy people, a hymn to joy.

Article writed by Adele Elisabetta Granieri and posted on July 13, 2016 on Wineblog and loosely translated by me, for courtesy of Dr. Luciano Pignataro

Azienda Monaci is located in the territory of Copertino, in the heart of Salento, where the red earth embraces the sky and looks toward the… 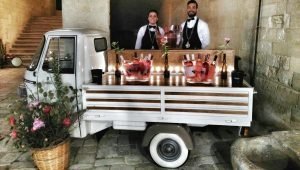 Who is and what makes the sommelier

In the common sense, the sommelier is the one who, having a good knowledge of the wine product, has the task of tasting and judging…

Launch of the third edition exposition of rose wine Roséxpo  scheduled 3 to 5 June 2016, and which will be held in the beautiful location…